I’m not a Dr., nor do I play one on TV but I wanted to briefly talk about the ABCs of emergency medicine.

In the past the ABCs stood for Airway, Breathing & Circulation. Which means make sure the airway is clear, the victim is breathing and that their heart is beating and control bleeding. But things have changed – the new way of looking at the ABC’s is actually CAB (Circulatory, Airway, Breathing) especially for people like us who may be first on a scene and perhaps during a time where 911 may not be able to get to you due to a major event such as natural disaster or worse.

I keep pounding into people to remember the rule of threes:

3 Minutes without Oxygenated Blood to the brain

3 Hours without Shelter  (I’ve written about how important it is to maintain 98.6 degrees)

Notice the three minutes without oxygen. This is an important detail because the amount of time it takes for a person to bleed out when they sever an artery is around 30 seconds to a minute. So checking to see if they’re breathing may not really be important when you see a red fountain. Deal with the bleeding first, then worry about the rest. One problem at a time.

Depending on the wound and how fast the fountain is flowing will depend on what measures you’ll want to use to attack the problem. First and foremost direct pressure to the wound is the first step. If you believe it to be an artery go above the wound at the closest pressure point between the wound and the heart. The next course of action is a pressure dressing and if you have it you may want to use a coagulant of some kind. There are two which are available to the public: Quick Clot and Cellox. 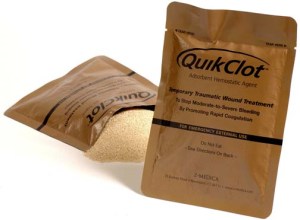 The difference between these two products is Quick Clot will cauterize the wound while Cellox will not. Using Quick Clot on a patient is effective but can be very painful and once the tissue has been cauterized, it’s gone. I carry Cellox because it is made from cellulose material and is equally as effective. Notice on the packaging it says “No heat generated in use” so it won’t destroy the tissue in the wound. When using either of these products pour it on the wound then apply your pressure bandage or dressing depending on the level of bleeding control you need to administer. Before tying off the bandage take the wrapper of the product and put it on top of the wound and then tie off the remainder of the bandage. So when a medical professional tries to put Slot A and Tab A back together they will know what product you used and what course of action they will have to take before getting to the wound.

There are many pressure bandages you can use and all try to accomplish the same task of creating enough pressure to subdue the bleeding but not cut off the circulation. There are two which are common and readily available the Israeli Bandage shown first. The back of the packaging has good graphical instructions and second is the H Bandage: 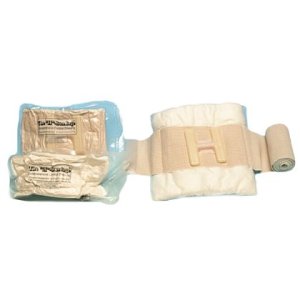 If all else fails or if the red fountain is more like a firehose then the tourniquet might me either the last resort or the first step. Later you’ll see why it might have to be the first step but for now just know that there are a number of tourniquets available on line. You really need to do a class in emergency first aid which covers this type of advanced measures and choose for yourself. There are companies who offer classes in life saving techniques such as Falcon Operations Group, after completion of the course you are certified in advanced CPR and you receive a personal trauma kit.

When in need you can use anything from a bandana to a ratchet strap as a tourniquet  and there are great videos on line about how to apply them such as on the Survival Dr.’s site, but here are a two tourniquets which are available through online medical supply stores. The first is the SWAT-T (Stretch Wrap And Tuck) which is really simple to use, really compact and has clear instructions on the wrap itself. You know when the SWAT-T has been pulled tight enough because the pictures distort and turn to diamonds. The second is a CAT (Combat Applied Tourniquet) Tourniquet  which allows you to crank the tourniquet after initial application to create more pressure. 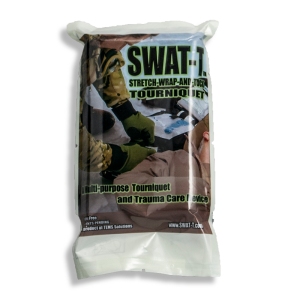 So if you or a buddy is bleeding profusely, knowing how and when to apply either direct pressure, a pressure bandage, or a tourniquet will be first priority. Then deal with their airway and after you have an open airway deal with getting air into the lungs and then get their heart pumping if indeed it’s stopped. If you have to go to the point where you are pumping their heart, just know you will be doing that for a long time. It’s a fallacy that people just wake up after their heart has stopped beating and you administer CPR. Unless you can apply a precordial thump the truth is you need to keep it going until an electric shock can be administered to restart their heart. In cases where there may be no emergency room to go to or there are the most dire of situations tough choices will need to be made weighing the possibility of saving someone and expending too much of your own valuable time and energy dealing with a person who might not be able to be saved and therefor risking your own life. However, some times performing CPR on a patient isn’t about the patient, it’s for the loved one watching the event unfold – even though you know it will probably be useless (this is in the event where there is no 911 or help on the way to take over), watching you perform CPR on the loved one will soften the blow of what they are witnessing.

You must also know full well there are ramifications to you providing any type of advanced life saving techniques. If you do not have the proper medical training and certificates then you are indeed breaking the law. Could you save your buddies life? Yes. Do you know them well enough that they won’t sue? Maybe.  Knowing your core values, is it more important to you to save someone’s life than what the outcomes are legally? Possibly. Can you really fuck some one up if you do something wrong? You have to ask yourself these and many more questions in advance and be comfortable with your answers. By the way, the answer to the last question is empirically YES, you can fuck someone up AND do more harm than good if you don’t know what you’re doing so it might be best to just bite the bullet and go take a class before you might need to use any of this information and hope you never really have to.

Here’s a video which shows how quickly things can go wrong: Ambush on Route Irish Don’t worry if you are queasy, because it’s a dash cam video there surprisingly isn’t anything graphic but it shows in real time the events of men under fire. This was a low profile convoy on Route Irish in Iraq which was stopped waiting because of an IED explosion which happened up the road prior to their arrival. They stopped well away from the activity, but stopped in a tactical formation, not a civilian one. Insurgents realized they were contractors and opened fire. If you look closely two things happen. The first is at :39 when the medic who first runs in front of the rear vehicle and can be seen with the dash cam. As he comes back you can hear him say to his buddy in that car that he’s been hit in his femoral. None of these guys had trauma kits on their person, so there were no tourniquets available so the Medic begins to look frantically for something to improvise into a tourniquet. Next, if you look closely at :56 seconds you will notice a large puff of dirt from the driver of the lead vehicle on the right who is down on the ground. The medic yells “Don’t be firing!” The driver of the lead vehicle was also hit in the femoral artery and as he was dying he had an involuntary reflex of pulling the trigger on his carbine and firing towards the rear car where the medic and dash cam are. The ambush actually starts at :08 so the driver was dead in :48 seconds after receiving his wound. The medic continues to search for something to use as a tourniquet and can be seen taking the shemaugh off the dash which was hiding the camera – this was his last resort to use as a tourniquet and this comes at 2:22. This goes to show that you need to deal with blood loss ASAP and having something close at hand is imperative. How long does it take you to find your keys when everything is calm and there’s no adrenaline flowing? The reason you carry advanced life saving equipment isn’t necessarily to save your buddy, it’s to save yourself. If each man had his own personal trauma kit on him that driver may have been able to self administer the device needed to save his own life allowing his team mates to continue to deal with the attack. I’m not saying you are going to hit an ambush on your way home from work, but if an earthquake hits and your car skids off a crumbled overpass will you have the basic medical supplies to stop bleeding and take care of yourself?

Here’s the kicker, this is the most important part of the entire post. People are always asking me why I want to know any of this stuff. Well, knowledge is power, it weighs nothing and you can take it with you anywhere you go. While there are laws against you practicing medicine on your buddy even if their life is on the line there is no law saying you can’t administer these techniques on yourself. In the end I still think its better if my buddies life is on the line to employ every bit of information I have and ask forgiveness later.