I wanted to dedicate a post to my favorite piece of gear I carry on a daily basis. The Exotac Nano Striker. 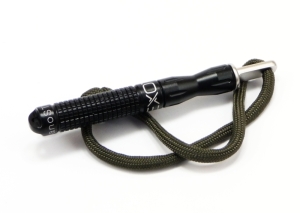 This fire starter attaches on to my key chain easily and is the perfect size to grab the keys easily when needed. The Nano comes with a lanyard which I promptly removed and fed my key ring through the hole on the striker. Here’s how it looks when fully assembled:

To make it work you unscrew the three pieces, notice the hole you attach to your key chain is on the smallest part of the Nano, making it easier to keep track of where this small piece is. The major reason I like this striker versus a host of others is it is water tight, sealed with O rings. The rod is good for 1,000 strikes and every part can be replaced from the O rings to the rod itself making it a tool when used properly can have back ups already in place for a rainy day. 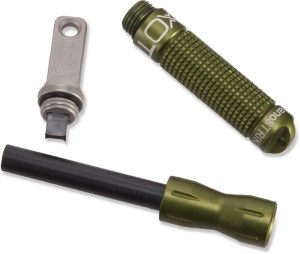 Once you screw the ferro rod onto the handle the assembly looks like this:

Here is the point at which I’d like to talk about the strengths and weaknesses of this piece of gear. The striker is your get out of jail card. Under normal operating procedures I would not recommend using this part of the starter. So you ask how do I make fire? Well thats simple, using the one is none, two is one and three is for me rule of preparedness you should have at least ONE knife on you at all times. The knife I carry to work is a bench made which just so happens to have a flat back with a 90 degree corner making it a great striker on a ferro rod. 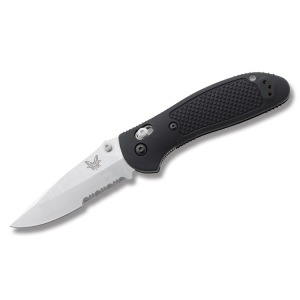 If you take this a step further and follow the adage: Carry seven knives at all times: two for you, two for your buddy, two to throw and one as a back up, you’re sure to have one at all times!

Okay so now that we have that out of the way lets get to that striker found within the kit attached to your key chain. This is your emergency back up. Reading reviews it is probably the most complained about part of the striker. People have reported the sharp striker popping out of the holder when they used them. I have used the striker and it works fine. I would guess people used too much force exceeding the strength of the glue holding it into the cap. But for safety measures I keep it in reserve until the day I find myself without a knife,  the SHTF and I really need it. 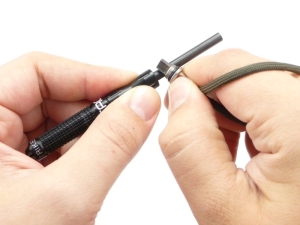 The Nano can be found at a variety of outdoor stores including REI.