Since the dawn of time when humans pulled a vine down from a tree there was a need to attach that vine to something to make it into a useful tool. As technology advanced from vines to cordage to manufactured ropes so did the technology of knots. Trust me, we’ve solved the riddle. You can find books from the 1500’s which illustrate knots that are still in use today. So why is it so many people can’t even tie their shoes correctly? Time and time again I see people who consistently tie a granny knot instead of a square knot. It’s something I’ve wanted to address for some time because I see it as a skill up there with making fire. It’s a technology arguably older than the wheel itself and it’s something all humans should know. The saying I learned at NOLS was “A neat knot is a happy knot, and a happy knot is a safe knot.” What this means is the saying “If you don’t know a knot, tie a lot” is dangerous because as your knots become jumbled and disorganized you actually do harm to the rope and put your life in peril. There are a million knots but these can be broken down into a few categories. There is the Bend, which is used to tie two ropes together, the Hitch, used to attach a rope to an object and a Loop which allows you to attach an object to a rope (think person or carabiner). I will talk about six basic knots. It is from these six that most other knots are made or stem from these mechanics. At the most basic these six are of vital importance to daily life as well as survival skills. I have been on hikes where even though I have had extensive knowledge of knots 100′ away was a person who didn’t know how to tie the simplest of knot and we were in a pretty precarious position. If that person had had the basic understanding of these knots it would have been a far simpler situation.

The most basic of all knots is the Overhand knot is that knot you tie when you first start to tie your shoes. This knot is the foundation to most knots. It’s simple and yet so important.

The Square knot, or Reef knot is when you take two pieces of rope (or the two ends of one rope) and join them.

If you notice the working ends of the rope and the running ends of the rope lay perfectly on top of each other, they are neat and not twisted. Below you can see the mistaken version of the square knot called the Granny knot. Here you can see the ends are mistakenly over and under instead of laying together. This causes the knot to twist and slowly work itself out, and if you’re on the end of the rope the only thing you’ll be learning is terminal velocity.

The Bowline is an excellent knot for mooring a boat to a dock or creating a harness in a pinch when having to rappel or climb. The beauty of this knot, as well as all good constructed knots is they can easily be untied after their work is done. The bowline has a lever which breaks the tightness of the knot allowing it to be released.

The Clove hitch is a way to attach a rope onto a pole or tree, it’s an excellent knot for tying your dogs leach to the tree when you go in to grab a cup of coffee.

The Figure 8 is the next step after the overhand and is a much safer knot. The figure 8 can be used when securing a line around an object. Such as securing your climbing harness to the climbing rope. This is called a figure 8 on a bite. The bite of the rope becomes a loop.

The way to make this work is to tie one figure 8, like shown above, then thread the line through the carabiner and follow the figure 8 back through until the tail and the working end of the rope are on the same side. Make sure the rope doesn’t twist or become messy, it should lay perfectly with the first 8.

The Prusik begins another type of knot called a friction knot. Knowing how it works opens up a host of possibilities such as the taught line hitch as well as others. The Prusik is an emergency tool for climbers and if need be can be made from a shoelace. You simply take a short length of rope and tie either a square knot, a figure 8 follow through or shown below the double fisherman’s bend creating a loop.

After you create the loop you wrap it around a rope three times, it should look like the loop is now hugging the rope with the remaining loop sticking out from the middle of the wraps like so: 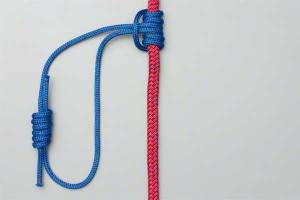 Now you have a loop to clip your carabiner or tent line. When weight is applied to the loop the friction of the wraps holds it in place. As you release the pressure (buy perhaps putting your weight on a second prusik) you can then slide it up a rope, apply your weight to that prusik taking your weight off the second prusik allowing you to raise it too up the rope. With this see saw motion you can climb up a rope or use this principal to any line where you may want to make it tight and loose repetitively with out having to constantly untie a knot. Examples are a door to a shelter or a food bag you want to hang.