After my recent run in with a bear in the Sespe Wilderness I thought it might be good to quickly run down what to do if faced with a wild animal. There are several to worry about, but knowing how to deal with the situation if it presents itself is paramount to not getting hurt. Here’s a list of the most common critters you may have to worry about:  Bear, Rattle Snake, Coyote, Mountain Lion and Wolf. When you are out in the wilderness you need to be aware of what’s around you. You need to be constantly scanning for signs of predators. Look for their track and scat – knowing who’s in you’re area will give you a heads up on what defense to take if you are confronted.

As we were hiking to camp we saw a ton of bear footprints and scat along the way on the trail. They will follow the same trails you’ll be hiking on. Let’s face it if you had the choice of bushwhacking or walking along a well traveled route you’d chose the well traveled route because it’s just plain easier. Here’s what footprints from a bear look like. In the middle picture you can see how the foot prints point outward from one another and you can see the claw depressions in the sand. 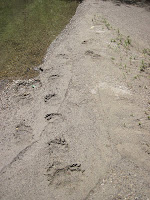 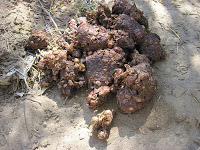 Bears are omnivorous so you will find almost anything in their poop, mostly you’ll find seeds and the remains of berries. If you find a wedding ring you should keep your eyes peeled.
Okay so there’s bear in the area, what do you do if you are confronted by a bear?
1. Do not run! They are pretty fast and can run for short distances of up to 30 miles per hour. If you run they will only see you as prey.
2. Do not climb a tree. Bears are very adept at climbing trees. If you climb a tree it’ll just piss the bear off because he’ll have to climb up there to eat your ass.
3. Give the bear a chance to identify you as human. Often times they will stand on their hind legs, this is not a sign of aggression. They are merely trying to get a look at who or what you are and try to smell better. Often when they realize you are human they will leave the area.
4. Speak in a loud low tone while standing. Try not to make direct eye contact and back up very slowly not turning your back to the bear.

5. If the bear charges stand your ground until they are going to make contact. Drop and lie on your stomach and cover your head and neck with your hands and arms, pray to your favorite deity and repeat.

Mountain lions are the most dangerous of all the predators you may encounter. 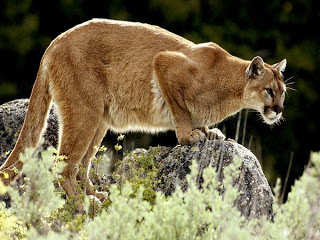 They are kings of stealth and will attack you from your back, often times by jumping on you from a cliff along the edge of a trail.  They are incredibly strong, powerful and can grow to 135 pounds, that’s a big kitty with huge claws and jaw strength enough to chomp off your thumb. here’s a Mountain Lion Print: 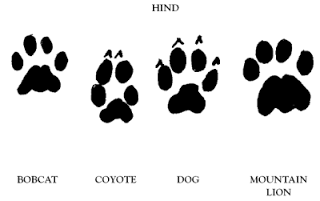 The Mountain Lion print has four toes and the pad has three bulbs at the bottom. However, it can appear to be a diamond with what looks like three toes and a pad:

What to do if confronted by a Mountain Lion? Well if you actually see a Mountain Lion consider it a once in a lifetime experience – unless you are a Park Ranger or someone who spends a great deal of time in the wilderness, they aren’t often seen. But this once in a lifetime experience can be pretty serious. If you see one, often times it will think you’re supper. Here’s what you need to do:
1. Do not run, this only tells the Mountain Lion that you are indeed it’s next meal.
2. Back away slowly to try to increase the distance between you and the animal.
3. Speak to it. Be firm and calm, let it know you are not a deer. A panicked reaction may provoke an attack.
4. If you have any small children with you, pick them up.
5. Make yourself appear as large as you can. Take off you jacket and open it up. Raise your arms to look taller.
6. Pick up a rock or a limb to make your self appear larger, but only if they are within a short distance. Do not bend over to pick it up, this is a sure way to get a Lion to pounce.
7. If they do attack fight it with everything you’ve got, go for the eyes and avoid the mouth. I wasn’t joking when I said they can bite your thumb off – it’s been documented. They are not expecting a fight and are used to easy kills, so if you fight back you may get it to stop and leave.
Rattle Snake:
If you encounter a rattle snake in the wild there are a few scenarios which could occur. One is you are walking or running and a snake will be slithering across a trail or sunning themselves. When this occurs they usually couldn’t care less about you and merely want to go about their business. Two is you happen apon a rattler and you startle them, they will then let you know you’ve entered their territory by making their rattle sound with their tail. This is a warning not to get closer. The third scenario is you’ve entered their territory and they’re pissed. You’ll know they’re really mad and ready to kill you because they will be in a coiled up position with their tail pointing straight up rattling as loudly as they can.

When this happens you should back up slowly and create as much distance as you can from the snake. In some instances a snake will chase you but a snake can travel aproximately 3 miles per hour and a human walks at about the same speed. So if this happens, do the math – walking backwards may not be the best course of action at this point. After giving the snake as much distance as possible choose your course of action. If you must travel in the direction where the snake is give it some time to calm down. Usually they will slither off trail and try to remove themselves from their percieved danger. If the snake stays on the trail you should try to go around it and stay at least 15 feet away from it keeping an eye on it.

If you get bitten, do not try to cut into the bite. You’ll undoubtedly create more open veins which will allow the poison to spread more rapidly. The best course of action is to remain calm, keep your blood pressure and heart rate low and seek emergency medical help asap. Most venomous snake bites are 98% survivable if you reach medical help within 4 hours.
Here is what snake tracks will look like: 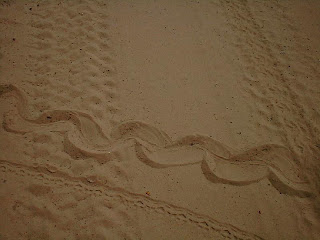 Coyote:
Coyotes are pretty much harmless. I’ve encountered many of them while trail running. The young ones don’t know they shouldn’t approach humans and some will try to get as close as possible. I usually try to wave my arms, clap loudly and yell at them. This will usually scare off a coyote. Some haven’t run off and seen me as a potential food source because many people who go out on trails will feed coyotes because they remind them of dogs and they can be kind of cute. When they have approached me and not run off I’ve squirted my water bottle at them and this has been enough to get them to run. It’s a bad policy to feed wild animals because they become dependent on getting food from humans and it erodes their instincs. 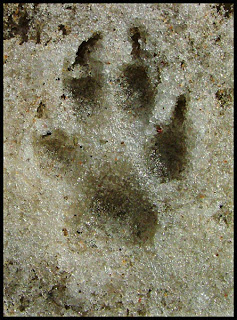 Wolf
Wolves have become an increasing problem because of the reintroduction policy of the wolf to some areas in the US and Canada. The Government has tried to reintroduce and increase the population of the Grey Wolf because it’s numbers had been dwindling. The policy has worked very well and the numbers of wolves has increased steadily because they are reproducing like rabbits.

Wolves are extremely dangerous because they do not fear humans and they hunt in packs. There have been documented cases of wolves walking right into a camp and taking food off your picnic table, attacking small children and attacking people while they sleep in their sleeping bag.
So what to do? If you are an adept tree climber and you can get up a tree before they bite you on your ass then climbing a tree is a possible escape… However, they may just set up camp at the base of the tree and wait you out. Because they hunt in packs they may take turns at sentry while the others go off for food and water. So they will definitely be able to wait you out.
Your best option is to stand and fight. With anything and everything you’ve got. But standing is the key, do not go to the ground this would be a sign of weakness. Be as large as you can, hold your backpack or jacket over your head to appear larger. Do not stare at the wolf in the eye or show your teeth, these are signs of aggression. Do not turn your back and run, you will just appear to be a chew toy. If you must use your fists or feet aim for their noses, they are extremely sensitive. Protect your head and neck at all costs and if you do get knocked down try to cover your head with your arms and use your feet to kick with everything you’ve got.
Here is what a wolf track looks like… Kinda looks like a Coyote or dog? Well they are much larger than coyote but can be easily mistaken for dog and they are basically the same species other than one being domesticated and the other not so if you are out in the middle of the boonies and you come across several of these tracks which look to be about a 100 pound dog they’re probably from wolves traveling in a pack and not your neighbors Labradoodle.