Communication is paramount in todays world. Without it we would be pretty isolated. Let’s flash forward to a moment when an event occurs and all communications as you know it are cut off. You are at work and your family is at home. How will you let them know you are well, or find out if they need help. Well, you won’t. Cel towers will become overloaded within seconds with emergency calls and complete Yahoos telling someone in Peoria that something has gone wrong and that the should turn on the TV to watch it live on CSPAN.

There are several major ways we communicate in todays world. Wired telephone which is rapidly becoming a thing of the past but is actually a pretty darn reliable method of communication even if the power goes out. Reason being your telephone runs on a 52 volt DC battery bank at your local telephone company hub close to your home, as long as you have an old school telephone without any electrical gadgets attached, you’re good to go. Because of redundancy there are overlapping battery banks and telephone lines which can support each other if one gets cut off you will still be able to make and receive calls.

We also use cel phones, which as previously stated a fragile method because the network can become jammed and towers themselves can be knocked out. Email and texting are slightly more reliable if you are using a wired internet connection, but then it will require electricity to run the infrastructure and if the shit hits the fan there won’t be any electricity to make those devices work.

So what is left? Radio communications are a pretty reliable form of communication, and HAM operators have been coming to the rescue for years when emergency services have fallen short. What is it I mean by this? Well Police, Fire, Medical Rescue as well as Coast Guard and other emergency personnel all have their own frequencies, meaning Burbank Fire cannot speak with the Northridge Police. In fact no department can actually speak to another. So when we have a wildfire or an earthquake, HAM radio operators come together (who are previously trained) to assist and bridge the network between departments.

Beyond this there are many HAMs who are just hobbyists and will come to the aid when needed. In Louisiana during Katrina it was HAMs who would communicate to the Coast Guard choppers telling them where people were trapped on rooftops and needed to be rescued.

In the event of an emergency HAMs will create Nets which are used to pass messages from operator to operator until messages can be delivered and in some cases messages will then be hand delivered to people who are not HAM operators.

So why HAM and not some other form of communication?

There are some options for using smaller radios if you are within a certain range of your house, like blocks or miles depending on the terrain. Simple two-way radios bought at a big box store can be used without the need for licensing because they fall into the “Family Radio Service” category. They are simple to use and have preset frequencies set up in channels. Often they are either rechargeable or run on AA batteries. The problem with these is they have a very limited range and only preselected frequencies giving the operators no choice of bandwidth. 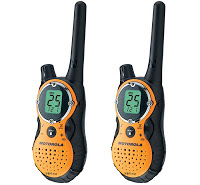 In the 70’s you may remember the CB radio. This was pretty good until the limitations of the technology came into play. There is a very specific bandwith in which these radios can transmit, they are only allowed to use up to a certain amount of power for transmission and have a maximum size antenna. So it is only good for a certain distance. This type of communication also requires a license from the FCC.

For the cost of a CB or General Mobile Radio Service (GMRS) license you can get a HAM license which is far more flexible and costs $15. The exams are run by volunteers and the license is good for 10 years without any renewal fee. These radios have the advantage of running higher power and their range can be extended by purchasing after market antennas. Amateur radios can range in price from $50 to over $500, HAM radios are a little like cars, there’s a model and a size to fit in most budget and needs. Below is the model I have, the Kenwood TH-F6. It runs about $350 and is a tri band 5 watt radio.

There are testing centers in most every city across the country and are usually offered weekly. You can find a local testing center at www.arrl.org. Here in Southern California we have the advantage of having two incredible instructors: Norm and Naomi, a married couple who teach out of the Lost Hills Sheriff’s station. They can be contacted through their website: www.hamclass.goodkin.net. They offer classes and tests quarterly and their website offers study guides and sample test questions. The advantage of going to Norm and Naomi’s class is that you arrive at 9am and study all day learning what is required to pass the exam, at 3pm you take the test and by 4pm you know if you passed. It’s a great class and it’s where I took my test.

Once you get licensed you are able to transmit on a wide variety of frequencies. In Southern California we have a repeater system called PAPPA which allows you to connect with people from Tijuana to Santa Barbara and from Los Angeles to Arizona. You’re able to speak with people from all over and share information. With an antenna and a car kit I’m able to use my handheld in my car or take it with me to work. It provides up to the minute communications even when systems go down.