I have tried a wide variety of stoves and found every one to have it’s advantages and its disadvantages. I’ll try to share some things I’ve found with production stoves. These stoves must meet criteria not found in some of the smaller stoves I’ve written about. These stoves must adhere to certain safety requirements you probably won’t know about if you’re building a penny can stove. There’s been many years of R&D in these stoves and I’m sure there are more lawyers who have had their say than engineers.
MSR Whisperlite
When I worked at REI this was the stove I chose above everything else on the market. It was 1986 and I had just gotten out of the National Outdoor Leadership School. Because I worked at REI I was able to speak with stove manufacturers and test out their products. After 27 years I just went out and bought a new stove… Yup, you guessed it, the same exact model I bought in 1986. After all this time the MSR Whisperlite is still on the market because of it’s size, power and reliability. This is the shaker model, because when you shake it there is a little pin which cleans the jet. If I’m going out for a long haul I bring a repair kit they sell and once I even had to use it. This stove is incredibly powerful. I had been doing a summit ascent on Mount Adams in Washington State and it was about five below when we set camp. As the sun was setting I boiled water and cooked pasta in about 10 minutes, as I was eating it ice crystals were forming on the food as I brought it up to my mouth.
After trying various stoves by building them and experimenting with various manufacturers to try to cut weight I’ve come full circle and found myself back at the MSR Whisperlite. I can not recommend it highly enough. The only gripe I have is when it’s folded up it’s an awkward shape and you can never seem to get it to pack neatly in your backpack. 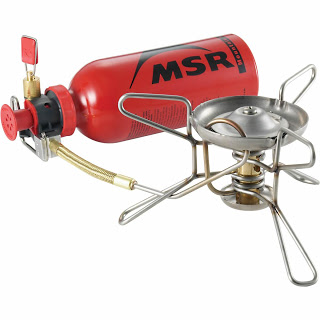 Pocket Rocket
The Pocket Rocket is one of the smallest and lightest stoves on the market. It works well and as long as you have a stable base it will support a pot easily. The only drawback to these stoves which use canisters of fuel is that they sometimes have problems in the extreme cold. I haven’t tested these stoves in a long time and I’ve read that they are better in the extreme cold but I’m still apprehensive. Having said that if you’re in a warm climate they could be a good choice for your 72 Hour Bag because you can throw a canister in the trunk of your can and not worry about fuel leaking.

Jetboil Zip Personal Cook System
My buddy and I went hiking between Christmas and New Year along the Sespe River. I had my Whisperlite stove and he had his Jet Boil system. I was impressed with how easily it lighted and how quickly it brought the cup to a boil. It was indeed faster than my Whisperlite and it packed into the cup very neatly making it very appealing for its simplicity.