What type of knife is the best one to put in my 72 Hour Bag? There are many types of knives and blade styles. Choosing the right fit for you can be a daunting task. Lets break down some basic types of knives. This topic can spur a ton of opinions and claims that this knife is better than that knife much like people who talk about stopping power of one bullet versus another. Here’s my philosophy on knives. They are a tool and should perform at a high level when abused, so buying a really expensive survival knife could be useless when you may end up using it as a shovel and at that moment its ability to be a shovel is way more important than who designed it and your bragging rights that you spent $500 on a one of a kind hand made knife. Having said that, I believe in quality and sometimes paying a little more is worth it. So it’s a delicate balance to find the right fit for you. On a last note, I’ve said it before and I’ll say it again. I refer to a knife in your 72 Hour Bag as a tool, not a weapon. Don’t think you are Jason Bourne and will be able to save the day. In the end it will get taken away from you and used against you. If you are faced with a knife in a fight the first stab wound you should receive is in your ass from running away. Knife fights never end well. Your best case is that you’ll bleed out after your enemy and that’s not a good scenario. Think of this item as an edged tool and that’s all.

There are a couple types of blades I’d like to address before getting started. There’s a straight blade and a serrated blade. I feel for a survival knife it’s best to have both combined onto one knife. The straight blade is good for cutting things like meat, leather wood and so on.

The serrated blade works like a saw and can be used to effectively cut rope or very tough objects. 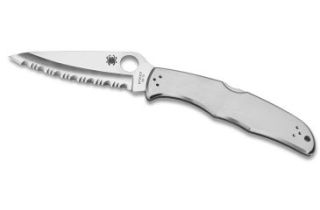 The two combined on one blade allow the knife to be very versatile. There are parts to a blade which are important to mention. There is the tip or point, the blade, the heel and the spine. There is of course the handle but for now I’m going to focus on the business end. The tip or point should be thick in width and not too shaped into a tapered point, it will break easily when under pressure.

The blade can have a variety of shapes and thicknesses to achieve many tasks, one such shape is called an onion blade. You can see the curve of the blade makes it fatter towards the end of the blade. This makes the end weighted and very good for slashing or hacking. 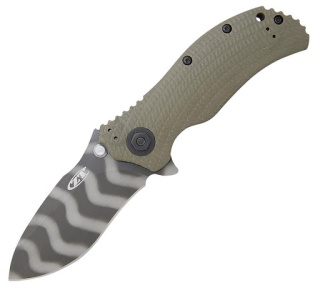 Another is a karambit – which is a particularly nasty fighting knife. It’s intended purpose is to cut rope, but you can see from the shape of the blade how vicious it would be if it came in contact with your arm or neck and the attacker rolled the blade around a curved surface. 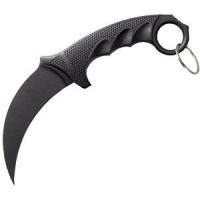 Parts of a Knife

The heel is the edge of the blade closest to the handle and is actually a good place to do your fine intricate cutting. If you need to use the tip to do fine cutting work grab the blade and only reveal the smallest amount the tip of the blade, it is much safer this way. The spine is the back of the blade, traditionally the dull side. Make sure it is beefy, to allow you to use a log and beat the back of the knife into wood to split it. There is the handle and the tang, a full tang refers to the part of the blade which goes all the way through the handle to the end which is called the butt or puno. Some punos have a pointed end to allow for striking. A full tang knife is best because it is stronger. Remember this is a tool and if need be, beat the shit out of it to accomplish the task at hand. Don’t abuse your knife, but don’t baby it. If you chose wisely your knife will take the abuse.

There are many types of blade shapes where it becomes the point. Each has a specific reason for it’s design. The first two are the blade types I think are the best design for your 72 Hour Bag.
There is the drop 555, often found on Swiss Army Knives. It has a good solid end which is very strong and easy to control. There is a good long edge for a good cutting stroke.

The Spear Point this blade has an exceptional tip strength because of the mass of the blade tapering to the point, it still has a reasonable point to accomplish tasks that require poking holes and can be affixed to a pole to make a spear. The blade has a long cutting edge giving the user great control. This is one of the best blades for a 72 Hour Bag.

The needle point tip it used mostly as a dagger and is most often a double edged blade, meaning it is sharpened on both ends. This is not a good blade for your 72 Hour Bag and illegal in California.

Gut Hook is good for skinning and cleaning animals when hunting, it’s very good for slicing because it has a blade similar to the drop point but because of the hook it has it’s limitations. Not really a good knife for the 72 Hour Bag unless you plan on field dressing wild game on your way home during an earthquake.

The Clip Point is a familiar style if you’ve ever owned a Buck Knife. It’s a very good blade but the tip can be weak because of it’s tapered point. It works well for piercing objects and it’s long smooth blade makes it very good for slicing. this is an acceptable blade for a 72 Hour Bag if you accept it’s limitations.

The Sheepsfoot Blade is great for whittling and carving, it’s nose is very strong and makes it a good knife to grab towards the tip because of its long dull spine. It also will help prevent stabbing because there is no real point. This is a strong blade and would be good in a 72 Hour Bag if you aren’t going to need to punch holes through leather or anything else.

The Trailing Point Blade has another weak tip, but it’s designed for skinning and slicing. I wouldn’t put this one in my bag either.

The Tanto Blade is known to have a very strong point but I’ve seen them break, the blade edge is straight and doesn’t curve well into the point. I’m not a fan of this knife, there’s just not enough going for it to use as a tool. It may work great as a Samurai sword, but not for a knife you’re going to use as a tool.

More in Part II Next week.